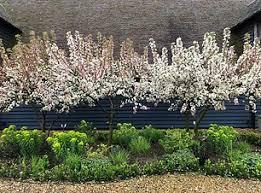 I’m taking a short break from my Chelsea reporting to bring you news of a superb new garden opening for the National Garden Scheme here in Kent this weekend.

I visited Denne Manor Farm back in late April on what can politely be described as an unseasonably cold and dreary Sunday. Being partially urbanized I was not correctly attired, but this didn’t prevent me from enjoying a lovely morning chatting with owners Louisa and Andrew Mills and strolling around their marvelous garden. By their own admission, the couple is not expert gardeners, but they clearly adore their garden and want to make it as good as it possibly can be. Like many of us, they are learning as they go and make no bones about that. Denne Manor has blessed with ample space for future development and bags of character thanks to its rural setting and skillfully restored outbuildings.

Louisa’s personal passion is for cultivating her favorite beetroots and gourds, and Andrew is in the process of planting a small vineyard. They are keen to encourage wildlife into their garden and to have color all year round. The couple keeps a flock of Swiss Valais Blacknose sheep which will hold visitors young and old in their thrall. This rare breed has been dubbed the world’s cutest and it would take a hard-hearted soul to argue with that. I was allowed to get in with the lambs who might also be dubbed the world’s friendliest. As for the ram – I’d recommend keeping a healthy distance!

Denne Manor Farm is situated in the very heart of Kent, not far from the villages of Shottenden and Chilham. This is one of my favorite parts of Kent; quiet, pretty and little known to outsiders. The farm is approached down a narrow lane and through a series of oak gates, one with finials that match those on the newel posts of the manor’s staircase. One notices straight away that the garden is both high and exposed on each side. This is a challenge for Louisa, Andrew and the team at Oakley Manor Garden Services who help the couple to maintain the grounds. Trees and hedges have been planted and are maturing quickly, providing some shelter from the worst of the winds that sweep across Kent. In the main garden, there is an especially fine tulip tree, Liriodendron tuilpifera, and mighty horse chestnut, Aesculus hippocastanum. Both appear to predate the current garden’s layout. 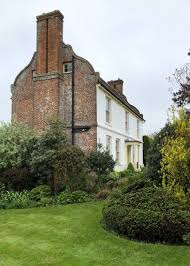 In common with many of Kent’s smarter country houses, Denne Manor Farm had humble beginnings and has enjoyed a chequered history. The oldest parts of the house date from the 15th or 16th Century when the English Bond brick pattern was commonly used for construction. The manor’s frame was made from timber. The house was significantly updated and extended during the early Georgian period: look up and you’ll see Dutch gable-ends, a common feature of the houses of East Kent, an architectural flourish introduced by waves of settlers that arrived from the Low Countries during this period.

In keeping with the agricultural setting, the gardens are laid out in an expansive and traditional style – wide mixed borders backed with small trees, mature shrubs and a good mix of summer flowering perennials and bulbs. Such generous space allows for large drifts of planting which can be admired from the well-kept lawns, another of Andrew’s passions. The planting has been carefully thought out to surround and complement the manor so that it appears to sit on a cushion of foliage and flowers. On my visit, the daffodils were starting to fade and tulips were coming to the fore, with the promise of alliums to come. Having had much better weather since then, visitors this weekend can expect to enjoy a very fine wisteria, roses, and peonies. As well as lawns and borders there is a rose arbor, a swimming pool garden and a vegetable garden to explore.

Previous owners commissioned an intricate topiary parterre to the side of the house, in a design representing a Kentish apple tree. It feels entirely appropriate for this house, but it’s all Louisa and Andrew can do to keep their handsome pack of Italian Pointers (Bracco Italiano) and Weimaraners from destroying it! 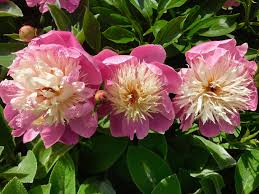 It did not take long to work out that Louisa and Andrew, who have spent much of their careers working abroad, are the most hospitable and down-to-earth of people. Opening your garden for the first time is a daunting prospect and a generous gesture, so do go along and give them plenty of encouragement. Louisa and Andrew are inviting visitors to bring along a picnic, as well as offering refreshments. The gardens will be open on both Saturday, May 26th and Sunday, May 27th from 12 pm-4 pm. The entry price of £5 goes to the charities supported by the National Gardens Scheme. Click here for more details. TFG.

N.B. Many of the photographs in this post have been kindly provided by Louisa and Andrew since my own efforts were somewhat marred by the weather!

This blog post is sponsored by Brees Tree Service Lafayette.