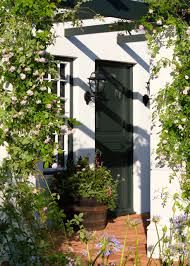 Same sponsor, different continent …. after a five-year hiatus Trailfinders are back and this time they’ve transported us to South Africa. For eight consecutive years, Trailfinders brought us Australian themed gardens, bidding a temporary farewell in 2013 with an epic garden designed by the brilliant Phillip Johnson, one of my garden design heroes. That garden won a gold medal and the coveted Best in Show award. In the intervening years, Trailfinders and their partners Fleming’s Nurseries were missed, not only for their gardens but their antipodean informality and sense of humor. The partnership always brought something fresh to Chelsea, occasionally getting up the noses of established British designers, which is never a bad thing.

Having taken a break, Trailfinders have backed both a new continent and a new designer, Jonathan Snow. His design presents us with a careful and beautifully articulated study of a South African wine estate. So much can go wrong with this style of a show garden. There’s the risk of cramming far too much in or ending up with a garden that looks like it belongs at Legoland. Buildings, in particular, are tricky as they generally have to be scaled down and occupy a lot of space. Trying to recreate any foreign landscape on British soil is a challenge, let alone three different ones. Whilst I wanted this garden to be great, I had my doubts. It turns out that I should have had more faith.

Everything about the delivery of this garden is quite brilliant. The proportions are superb, allowing the facade of the Cape Dutch homestead to look perfectly at home in its setting. A white verandah, paved with terracotta tiles, is swathed in pale pink roses, R. ‘Paul’s Himalayan Musk’ to be precise. Of course, there had to be agapanthus, one of the signature flowers of South Africa, but then comes a small, formal garden edged with box and billowing with cottage garden plants. Mixed in are cultivated forms of Fynbos* plants such as Aristea major, Dierama pulcherrimum, Tulbaghia violacea and Libertia grandiflora. Such gardens are typical of South African wine estates, providing a soothing contrast to the harsh Fynbos landscapes beyond.

A gate in a whitewashed wall leads into a small vineyard. If anything, this section might have been made slightly larger as it quickly gives way to Fynbos. In common with wine-growing areas the world over, roses are planted at the end of each row of vines. This allows early detection of diseases that might harm the vines since roses tend to succumb to problems first. In between the vines, wildflowers have been sown to attract insects. These would ultimately be plowed back into the soil as green manure. This kind of sustainability is essential in a finely balanced habitat which is already threatened by alien species and over-fertilization. Most fynbos plants are adapted to nutrient-poor soils and are particularly susceptible to the presence of a high level of phosphates, which leads to chlorosis (yellowing) and then necrosis (blackening). 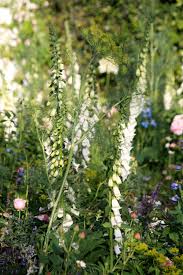 As we enter the show garden’s Fynbos the plot has been banked up sharply to the right, representing an area that would be considered too steep to be cultivated. Here we find a rich mix of plants, representing the world’s smallest but most botanically diverse floristic kingdom. There are leucadendrons, proteas, kniphofias, serrurias and leucospermums, a whole gamut of plants we recognized from florists and exhibits in the Great Pavilion. Most are not hardy here apart from in the mildest parts of the UK, and not entirely happy outside except in Western Cornwall and the Scilly Isles. Plants for the garden were sourced from Cornwall, Tuscany, and Southern Spain. 10,000 seeds purchased from Kirstenbosch were germinated and grown on into plants of show garden standard by experts at Kellways, a prominent name in British Horticulture since 1851.

Some visitors to Chelsea may be puzzled by the charred remains of shrubs at the front left-hand corner of the garden. These represent fire, which is an essential part of the Fynbos life-cycle. Fire clears old growth, returns precious nutrients to the soil, and enables certain seeds to germinate, though the effects of heat and smoke. The ground here is peppered with flowering bulbs such as ixia and Ornithogalum, taking advantage of the space and light to do their thing before larger shrubs regenerate from the base or from seed. It’s a cycle that has similarities to heathland here in the UK, or to coppice woodland, only without the element of fire. Where there’s an opportunity to grow, there’s always a plant to take it.

I know that I am not alone in enjoying this garden. It brings to a Chelsea the relatable and the exotic, formality and wild nature. It’s an exciting a heady mix, presented by a deft hand. Jonathan Snow’s design makes the plot appear considerably larger than it is, and views from the front of the plot to the homestead at the back are carefully contrived. No criticisms readily come to mind, so I shall not search for them – I even liked the simple post-and-wire fencing that surrounded the plot, which I thought was charmingly understated.

Trailfinders, Jonathan Snow and contractor Mark Richardson of Stewart Landscape Construction should be well pleased with their silver-gilt medal. What prevented the judges from awarding gold is anyone’s guess, but for what it’s worth I was charmed by the whole composition. Well done chaps – please don’t leave it another five years before you come back and transport us to sunnier climes again. TFG.

Continue scrolling down for an extensive plant list and more photographs.

*Fynbos is a small belt of natural shrubland or heathland vegetation located in the Western Cape and Eastern Cape provinces of South Africa.

In the Homestead Garden